Virtually everybody I have spoken to in Livingston South during these past few months has told me how absolutely fed up they are with the amount of litter in our green spaces.

We have some gorgeous spots in the ward. Howden Park, with its views, is one of the loveliest places in Livingston, yet it is often strewn with bottles, cans, sweet wrappers, pizza boxes and all sorts of unsavoury things.
I've filmed two videos there, today and last September, and you can see the extent of the problem.

It's the same in so many green spaces, and in underpasses too, where broken bottles provide an additional hazard for children and dogs.
I've spoken to more than one person recently who has faced a large vet's bill and a miserable pet who has been injured by something they picked up in the park. My own springer spaniel Hazel had a similar experience last year.
We need our green spaces to be calm and restorative, particularly in the current stressful circumstances, when we aren't allowed to travel far.
As your Councillor, I'd make it a priority to tackle this. It needs some creative and fresh thinking. I was quite taken by the City of York's "Don't be a tosser" campaign in public parks. 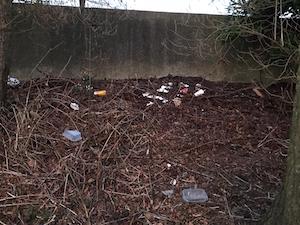 The Council needs to do more to stop this unsightly and dangerous problem and, if you vote for me as your Councillor on 11th March, I'll make sure that they do.
Printed and published by Sally Pattle on behalf of Caron Lindsay, (Scottish Liberal Democrats), both at 139 Buchanan Crescent, Livingston, EH54 7EF.

Find out more about our work - sign up for emails today:

Make Linlithgow a place of safety for Ukrainian families

Watching the war unfold in Ukraine has been horrifying for all of us, but it is a living nightmare for one local Linlithgow family I’ve spoken to this week who still have relatives trapped there. While the ongoing fundraising for the Disaster Emergency Committee is wonderful, Anastasia Martin’s family are desperate to help house Ukrainian refugees here in Linlithgow as soon as possible.

Save the Low Port Centre

The West Lothian Liberal Democrats strongly oppose the plan by West Lothian Council to abandon the site of the Low Port Centre without even basic consultation with the community.

Sally Pattle and the local Scottish Lib Dem team want to hear your views Like you I care about this area and want the best for it. That’s why I’m asking for your views today. Please take a minute to fill in my quick survey, to help me fight for our community.